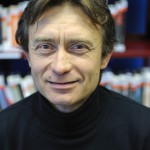 Faculty member since 2000, Professor Hanhimäki was previously a Lecturer at the London School of Economics. From 2002 to 2003, he was a Fellow at the Woodrow Wilson International Centre for Scholars (Washington, DC) and is the recipient of the 2002 Bernath Prize from the Society for Historians of American Foreign Relations. He was elected Finland Distinguished Professor in 2006. His main research interests include American foreign policy, transatlantic relations, and the international history of the Cold War.