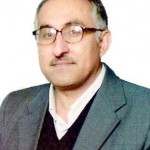 Pr. Mahmoud Al-Qaysi graduated from the University of Baghdad in 1989 and got his PhD in 2003 in Medieval European history. He works at the Department of History at the University of Baghdad. He is interested in comparative studies and experiences of modernization in the world (France, Germany, Japan and South Korea). He published Charlemagne and Others (Baghdad, 2011); The Japanese Experience, Iraqi Perspective (Baghdad, 2011). He also translated into Arabic Harun Al-Rashid and Charlemagne by Francis Bucler (Baghdad, 2013).