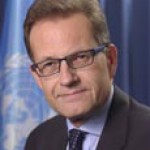 On 5 November 2013, Secretary-General Ban Ki-moon announced the appointment of Michael Møller of Denmark as Acting Head, United Nations Office at Geneva. Mr. Møller replaced Kassym-Jomart Tokayev to whom the Secretary-General is grateful for his outstanding contribution and commitment in spearheading the Organization’s work.

Mr. Møller brings to the position a wealth of experience, having served for more than 30 years as an international civil servant in the United Nations. Most recently he was Executive Director of the Kofi Annan Foundation from 2008 to 2011. Prior to this, he served as the Secretary-General’s Special Representative for Cyprus (2006-2008) and Director for Political, Peacekeeping and Humanitarian Affairs in the Office of the Secretary-General (2001-2006), also serving concurrently as Deputy Chief of Staff for the last two years of that period. Between 1997 and 2001 he was the Head of the Office of the Under-Secretary-General for Political Affairs at UN headquarters in New York. He served in different capacities in Iran, Mexico, Haiti and Geneva, where he started his career in 1979 with the United Nations High Commissioner for Refugees.